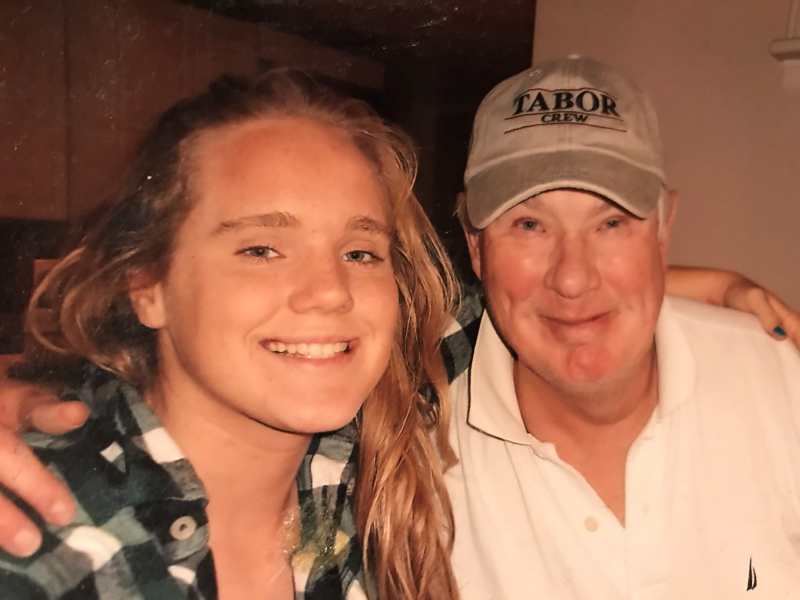 Caroline Murphy and her father, "The Captain"

I have never thought of myself as a runner. I mean, I used to “run” cross-country in middle school so I could sneak away from the run and grab snickers at the local Mobil, but other than that, my running abilities were next to nothing. I even actually used to hate running. It wasn’t until my dad was diagnosed with ALS in June of 2016 that out of all the things I could turn to, running became one of the only things that would and could calm me down.  Since my dad’s diagnosis in 2016 and his passing early this year in September, I haven’t stopped running. When the days get hard and laughter can be hard to find, I can still run.

When my dad was diagnosed in June of 2016, it became clear that ALS is the type of disease that doesn’t take any prisoners, not even my dad. It shook not just my family but also all those who knew and loved him. See, my dad was great. He was kind of that dad for everyone. He was a little weird in the best of ways, a bit too adventurous, maybe a bit of a wandering soul, the kindest guy, and extremely funny. He was the one who would not only wait for AAA with you, but also call them, and follow you home if need be. He was that dad. He was my best friend and my biggest pain. My dad was the type of guy that when he loved, he loved hard and he loved a lot.

In his life, my dad had three great love stories: his family, his wife, and the sea. Anyone that knew my dad knew him for these loves because he showed them in all he did.  Many know my dad as “The Capt.” Which is funny because he was never actually a Captain—he was a Lt. in the Coast Guard as well as a member of the Merchant Marines. My dad may have not been a Captain, but he was a devotee of the sea, a seafaring sailor, who always found his way home.

I was with some friends during the fall of 2016 when I realized that there had to be a way to combine my new escape (running) and my dad’s diagnosis. I decided to look for races that are held in support of ALS research or awareness. Being from the Boston area and being a fan of Harpoon, I was so happy when I found the Harpoon 5-Miler for the Angel Fund. Given my dad’s nickname, my friends helped me come up with the idea for “Run For The Captain.” From there, the race took on a life of its own.

It was during the months between registering, fundraising, and actually running that the race became more than just running a race. It became a day of hope for me and my family and friends. While my dad was unable to make it to the race last year, as around the same time as the race his health took a drastic turn, he was still with me when I finished and when I ran by Castle Island where he used to take me for a hot dog and fries. I mean he was literally with me, because I had him on Face Time for most of it. But now that he is gone, it doesn’t matter because he was with us all as we ran last year, and he’ll be with my two friends and me again this year.

During last year’s 5 Miler, “Run For The Captain” raised over $3,000 for the Angel Fund.  Ever since the race last year, my team has raised close to $10,000 in fundraising for ALS research from the start of the Harpoon 5-Miler to the finish line of the NYC Marathon. “Run For The Captain” hasn’t stopped running and we don’t plan on stopping any time soon. And even though I wasn’t sure I was going to run this year as everyday brings new joys (memories filled with laughter) and new obstacles to overcome in my life without my dad, any hesitation I had changed when I was asked to write my dad’s story—our story— for this year’s race.  Sharing our story is a way to bring awareness to a disease that is a true monster. Also, why not run for my dad who loved Boston, loved the harbor, loved the route the race runs, and loved that his daughter loved good beer—he was proud of that point especially!

My dad took on raging seas, raging teenage girls, law school, marriage, more raging seas, but in the end there was one battle he couldn’t win and that was a battle against an opponent who plays dirty and is known by three letters: A-L-S. And while ALS is a tough opponent, we have to believe that some day it will be beatable, curable, and figured out because the world isn’t as bright with out people like “The Capt.” in it and that can’t keep happening because of some disease that hides behind three letters.

Thank you to all of our family, friends, Harpoon, and The Angel Fund for giving us something to “cheers” over not just on race day but on a lot of days throughout this hard year.

You keep us all Murphy Strong.

Caroline Murphy - “Run For The Captain”

P.S. If you would like to donate, please visit the “Run For The Captain” fundraising page.